Even our opponents come to us for help. See what this former defense attorney has to say:

"As an attorney who has worked on cases against Tom and Alesia, when I needed to file for disability myself, I called them for help." —N.B. 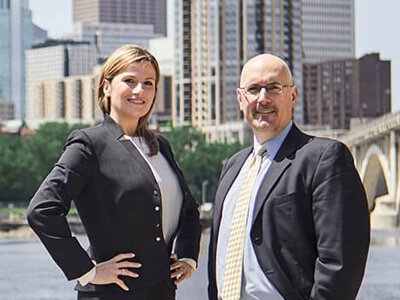 At Beedem Law, we pursue realistic, long-term resolutions to legal issues related to:

The Employee Retirement Income Security Act of 1974, commonly known as ERISA, is a federally mandated law that provides private industry pension plans with minimum standards. It also provides extensive guidance as to how federal income tax should be applied to the transactions within employee benefit plans. Its purpose is to protect both employee and beneficiary interests within these benefit plans. This protection is provided in several ways:

ERISA was created in the wake of the 1963 Studebaker Corporation scandal. A major US automobile manufacturer, when Studebaker closed its factory in 1963, it was discovered that its pension was so badly managed and funded that it would be unable to fully pay all of its vested employees.

Several ensuing senate investigations into pension management through the 1960s revealed a rash of deficits. A series of reform bills were issued, though they were often opposed by union leaders. Eventually, after a 1972 television news expose on NBC, popular support for pension reform mobilized, and President Gerald Ford signed ERISA into law in 1974. Many reforms to ERISA have occurred in subsequent years.

Definition of a Pension

Although ERISA does not require a private employer to create a pension for their employees, if a company opts to fund one, ERISA dictates how that pension should be maintained. According to ERISA stipulations, a pension must define a minimum time period by which an employee will become vested in the pension. It also defines how beneficiaries will be paid.

WORK WITH A QUALIFIED ERISA LAWYER

ERISA does not require a private employer to provide health insurance to their employees, but it does regulate the health benefit plan if it is offered. In recent years, amendments to ERISA have occurred, resulting in the following developments:

In previous decades, an employer was sometimes able to deny a pension payout to an employee who left the company before they reached the age of 65, regardless of how many years this person had worked at the company. In order to prevent this from happening, the Pension Protection Act of 2006 was created. This mandates that any employee contributing to a pension after 2006 must be guaranteed vestment after three years of contribution.

In order to prevent the types of cases that precipitated ERISA’s forming in the 1960s, ERISA also delineates the ways in which a pension should be funded. ERISA requires minimum funding amounts to be defined and maintained. It also requires employers to contribute enough money to keep the standard account from going below $0 at the end of the year.

Provides an outline for how ERISA guidelines should be enforced by the various government entities responsible for pension plan monitoring. Additionally, it establishes minimum standards that a person must meet before being hired by one of these departments, including two separate exams.

Provides standards by which an organization may terminate its pension plan. These differ between single-employer plans and multiemployer plans. Additionally, the Pension Benefit Guaranty Corporation, or PBGC, was created by ERISA to monitor and ensure all stipulations of termination are followed.

Multiemployer plans must be terminated in one of the following ways:

There are also several ways in which a single employer may terminate their pension plan.

In a standard termination, an employer may terminate their plan as long as assets exceed liabilities. In the case that they do not, an employer may make contributions until the assets are equal or exceeding those liabilities. Once this has been established, annuity contracts must be purchased for all participating employees.

In what is called a distress termination, an employer must prove to the PBGC that at least one of the following is happening: the company is filing for bankruptcy, continuing the pension will result in business failure, or that a decrease in the workforce has made continuing a pension difficult for the business.

The PBGC can also terminate a single-employer plan in what is referred to as an “involuntary termination,” if it determines any of the following are taking place:

A Minneapolis, MN ERISA Lawyer Will Protect Your Rights

If you are wondering if contacting an ERISA lawyer is the right decision, understand that they will make a major difference in the result of your case.

Under ERISA, you generally do not have a right to a bench trial or a jury trial. The entire foundation of your case will be determined on how the claim was managed during the claim process. Taking this into account, the significance of securing the assistance of a skilled Minneapolis, MN ERISA Lawyer who can guide you through claim process cannot be overstated.

Do you need an ERISA lawyer in Minnesota? Beedem Law is here to protect your rights and help with your claim in its early stages. Working with an experienced ERISA lawyer is your best chance at winning your case. As an added bonus, we at Beedem Law offer free case evaluations to clients with concerns about ERISA, pension plans, and related matters such as medical and long term disability benefits. Contact us today to schedule your free meeting.